This is in response to @LesyleyAlmost on Twitter, who asked

" You wouldn't deny assistance to your neighbours, would you?"

The neighbours in this case are the Irish, and the assistance is a huge loan.

The answer is this:

If my neighbour had spunked any money he might have had on a horse called the Euro in the 3.45 at Lisbon Treaty, and then expected ME to borrow money off someone else to help dig him out of the shit, then "No".
Posted by Uncle Marvo at 11:02 4 comments:

A Twit for whom I have a secret admiration quoth today

"Sad state of affairs when people are willing to protest about what affects them directly but not those people who are really vulnerable."

People are egocentric. All people. It is ingrained in the human psyche and will never change. Yes, you get the odd Mother Thresa and Dalai Lama. And Pope. Every know and again someone gets an "Epiphany" (wrong word, but everyone knows what it means). The Road to Damascus moment.

A lot of people I know give to charities. So do I. As an when.

When things get tough, and the poorest suffer, in times such as those in which we now live, people gravitate towards the caring, sharing promises.

That means that my kids can go without their piano lessons and their singing lessons. I will give that to the pot. The pot can then pay for somebody else's kids to have their lessons.

I shall get rid of my car. I don't need a car that big. I'll sell it, probably worth £6K now. I'll buy a really small one. Probably cost me £5K. I can put that change in the pot. Then the pot can pay for someone else to have a car. Or a house for a month.

Then I will give up cider. I'll put that money in the pot. The pot can pay for someone to have a new hip, so they don't have to go without stuff and pay for it themselves.

Next, I shall give up buying myself anything, like clothes. I can wear clothes for lots of years before they are so full of holes I have to use them to wash the small car I now have. All that money can go into a pot, and it can pay for people to retire earlier, and have money, so they can pay for clothes, and cars, and cider and music lessons for their grandchildren.

I shall feel better.

Now, I can't see a hole in this argument.

Slightly too long for a tweet, not really long enough for a blog.

Look. There are two sorts of students. One sort who want to do some bloody work and get some sort of useful qualification. The other sort, who want to wank about for three years and for some godforsaken reason think that not only do they have a right to do so whilst I pay for them, but also that they will magically find a job as the CEO of Google with a degree in toenail-cutting.

Now, the first group. You stand over there. OK? 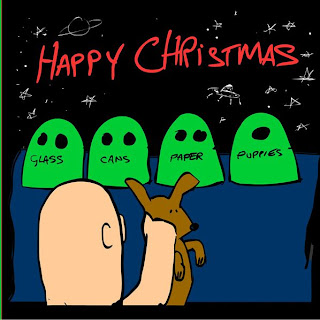 There. You can make your own Christmas Card now.
Posted by Uncle Marvo at 13:05 No comments: