I went to Marrakech last week for a few days. Spell checker says it's Marrakesh. It isn't.

Marrakech is in Morocco, which is officially Royaume du Maroc, because the French overran it in the early 20th century, when the Brits were overrunning India and places like that. That's why they speak French. They speak another language too but, like Flemish, nobody else speaks that, so they can talk about you while you're there.

They're all crooks. All of them. They're all skint, apart from the King, but they all have pictures of the king hanging on their walls, presumably so when the revolution comes and he deploys the army, they hope not to get shot. The king has loads of palaces and shit.

The currency of Morocco is the Dirham (easier to remember Durham and say it in a Northern accent), which is abbreviated to DH, or MAD. Every 10 of those is worth roughly 70p, unless you change money at Heathrow in which case every ten of those is worth £1, and you're an arse.

Petrol is £1 a litre. That doesn't matter, because you get in a taxi which will try to charge you 60DH (about £4) to go anywhere. You tell them 20DH. They say 45. You say 20. They say 40. You say 20. They say "vous voulez" which means "bugger it, I need the money" and you give them 20 at the end of the journey, unless they are nice in which case you give them 30. Check your change. Fuck it, it's £1.40 and you've got ten miles for that, in blistering heat. The aircon doesn't work. The windows are either open or missing, though. I THINK they drive on the right, but it's hard to tell.

Go to the Ensemble Artinasal, a government (I use the term loosely, the government is lining its own pockets, not like our one) run bunch of shops where you don't haggle. The price is the price. Find the price of the thing you want, then go to the souk, or market, or den of thieves, which is like Mos Eisley Spaceport except the people in Mos Eisley have better teeth. At least they have teeth.

Go round the souk, where everything similar is grouped. So if you want a particular thing, say a lampshade, you go to lampshade street. You can get a heck of a lot of work for not much money. Tell them that is what you're offering and walk off, they'll find you, eventually that's what you'll pay. If he won't take it, next door will, and if you're lucky a fight will break out and they will throw stuff about.

A bloke will come up to you and tell you that the way you're going is the wrong way, and "is closed." He will take you round in circles for hours and then ask for money. Tell him to fuck off. Whatever you offer him "is not enough." Take the piss out him for a while then tell him that in payment, you will give him some advice, this being "find the twat who told you that you could rip off an Englishman with a simple trick like that, and kick him in the bollocks." This leaves them confused. If it doesn't work out, growl a bit. They're mainly short and not very well-nourished.

Passport control is shit, like every banana republic I've been to. Takes ages. I presume they're worried about people getting out, because nobody in their right mind would want to get in for longer than a few days.

On the upside, the restaurants are excellent. I managed beers, wine, escargots (6), locally caught Atlantic spider crab, ris de veau, proper Baba au Rhum (where they put the rum bottle on the table and you neck most of it), decent brandy, coffee and petits fours, cost about £22 and I was in the gutter. Taxi home, £1.40. Brilliant. Put on half a stone.

Or you can eat in the square, on the street, choice of 50+ "cafes", no alcohol, loads of food, great kebabs, salads, watch a fight, about £4. Imodium and Diarolyte, as well as unbranded Kaolin and Morphine available at all pharmacies, about £4 too. Lost half a stone.

Interesting fags can be bought from the baccy-man, "normal" Marlboro about £2.80. Or 20p each if you only want one. Or 50p if you want them a bit interesting. If you are caught smoking these, Plod would like some too, and a few quid, please.

Don't take the piss out of Allah. They hate that.

Ah yes, camel. I missed the camel and got this pic of some people going to work. Have that instead. 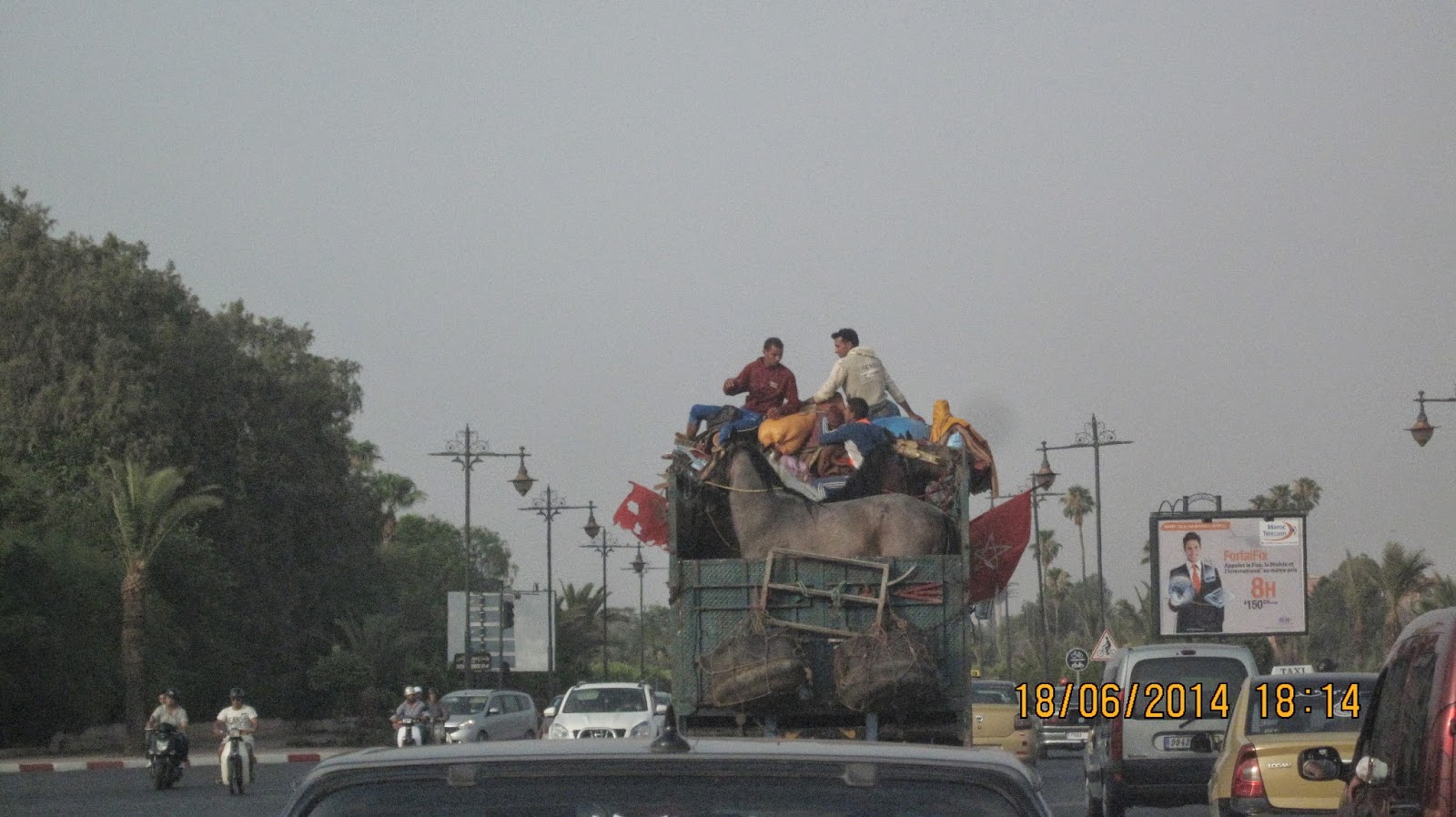