At the risk of upsetting at least everyone, God, and his dog, I feel I must say this.

Please bear with me, or fuck off, I don't honestly care which if your name isn't Julie.

There was a referendum, recentylyish. It was about whether the "people" wanted to stay in the EU. It was brought about because politicians didn't have the bollocks to do anything else, and UKIP (wankers) said if they got in, then they would do it.

David "Pigfucker" Cameron did it, then went balls-out to tell people to vote "NO", which they didn't, because they didn't like him.

They lost. And Brexit happened. And Pigfucker lost his job.

I didn't vote. I never do. I don't like to encourage the wankers.

I don't actually care, I don't value money much, I have enough of it to live on. I don't make money out of money and despise people who do.

Now it's all ratshit, the pound is worth about a pound.

The new Prime Arsehole, Ms May, has had a sodding election, she basically lost.

Now they're having another fucking referendum in case they win. Lose. Whatevs.

Please stop me saddling up the gnus and running amok.

And stop voting. Please do that.
Posted by Uncle Marvo at 19:31 No comments:

May I call you Jon?

I only ask because that's your name. You may call me Pengy, or Paul, for that is mine.

I don't normally respond to people personally, for I am busy, earning money to fund myself, my family and you.

But you posted this, and said "admit it, you know someone like this." 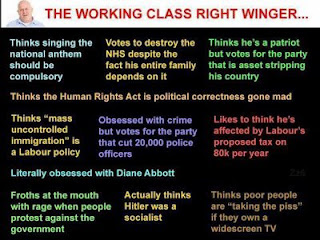 I'm not any sort of wing. I will admit to understanding what a weapons-grade crock of irredeemable carnage any kind of socialism causes in any country within only a few years, so I guess you could say I err on the side of sensibility. I think you would call me right-wing, though I'm not.

I'm not any sort of class. I work. I am not management. My dad went hungry so we didn't.

I am not disabled or anything. I expect I will be one day.

Let me talk about the points you mention in your very clever graphic. I've corrected the punctuation where appropriate.

As ever, thank you for reading. Please tell Jon.
Posted by Uncle Marvo at 19:23 5 comments: