Here is my little blogette concerning angling or fishing.

I like sea fishing, where you catch a fish and then you pan fry it (I don't know why they say "pan-fry", I suppose it makes it obvious that it's fried in a pan, as opposed to, say, an old sock or dustbin lid).

Anyway, there are blokes who get off on the traditional struggle of taking the 4x4 down to the river, ripping up the meadows with their all-weather tyres and 4 litre diesel engines, so they can pit their immense wits against those ferocious denizens of the deep which lurk threateningly below,

Skilfully, they tie a bit of line onto a hook, add a lump of lead to sink it, and a float so it doesn't sink, then impale a worm onto the hook and, using a massive carbon fibre pole, launch this lot across the river so far that you wonder why they didn't start on the other side.

They then use mental force to entice the evil fish onto the hook so that they can proudly show their fellow warmongering humans that their fight, nay battle, against the fearsome foe was won, then rip the heck out of the despicable adversary's mouth, causing irreparable damage, and chuck it back in.

Sometimes the fish, or the reeds, win. When this happens, the hapless angler loses his tackle. Undaunted, the mighty angler simply reaches into his tacklebox and replaces this expensive pile of detritus with another.

Here are my friends. They are ducks (more specifically a duck and a drake). They are called Lucky and Mucky Duck. Lucky is the one with the orangy beak and is actually a duck. Mucky is a drake (lighter beak, when he is grown he will have a green head). They are mallards. 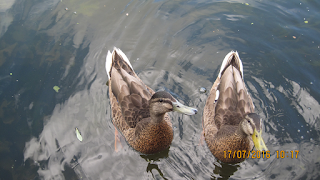 Here is a picture of the anglers detritus. Lucky had this lot shoved in her beak and I got it out, not at all aided by Mucky who thought I was attacking Lucky. I won't show the injuries Lucky suffered, nor those suffered by me whilst trying to remove it all. 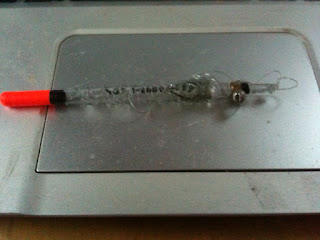 I don't care what hobbies people have. Most of mine involve drinking and I try not to piss on the duck's heads afterwards. If anglers would please think about the crap they leave behind and what damage it might do, and perhaps make an effort to clear up a bit, or try something less adventurous, maybe, Lucky wouldn't have had to go through that. And nor would I.

I was sitting at work earlier. I could do no work because I'm off for a week, and they're backing my stuff up so I can't touch it.

In came some chaps to ask me about some bits we're doing.

We discussed said bits. Anyway, one chap said something about some footballer, I wasn't really taking a lot of notice. Some jolly foreigner chap. Apparently he paid a "witch doctor" for some time, it was like insurance. Then he stopped paying, and broke his leg playing footie. It was an omen.

Then the bloke said "imagine that, you pay and get nothing and then stop paying and anything that happens to you is because you stopped paying the witch doctor. How stupid are people?"

I said "imagine if you paid like hundreds of pounds a week just in case something went wrong? And nothing did? And if you stopped paying all of a sudden something would go wrong?"

"Yes, I replied. I was talking about the NHS."