This is some stuff about the EU.

In 1945 some chaps decided that Hitler had been a bit of a git and that war was a BAD thing.

They decided to have a club where there would be no more war.

This was a GOOD idea. War is bollocks.

So the chaps decided to get together in perfect harmony and all be one thing, that way they wouldn't have anything to fight about.

Lots of talking was done and nobody got killed.

In 1975, 30 years later, Britain was invited to join their club. There was no way on earth that this would happen because it was too soon, and many British folk remembered the last war, which was pretty horrible. So they called it a Trade Agreement, where British people could buy stuff from France, such as cheese, which is, quite frankly, all that the French really make.

Some British people like cheese and thought that Brie was superior to Cheddar so they voted themselves in.

A bit later, the club changed its name from the EEC to the EU, got a flag, three presidents, demanded loads of money, took the Queen off of everything and we were stuffed.

They based themselves in Brussels and Strasbourg. They pay themselves bagloads of cash.

They do nothing for it.

I have an anti-alligator device here, it is actually a broken alarm clock. There are no alligators here, therefore it works. And that is why we have no more wars, because they have a thing which means there are no more wars. It works on the same principle. YOU know, and I know, that the reason there are no alligators here is that I have a door, through which alligators can't get. I know, and you SHOULD know, that the reason we have no more wars is because if someone starts one then all hell will let loose and we will all die. Nukily.

So. I do not think the EU does anything of any use. All they do is strut. And trough. Britain pays them about £50M a day to mainly build roads in Spain which nobody wants, least of all the Spanish.

I don't think we'll ever get out, because too many people whose ridiculous lifestyle depends on us being in. And, trust this penguin, if we get out, there will be a disorderly queue of others who will want to do the same.

Among the people who desperately want to stay in are these. 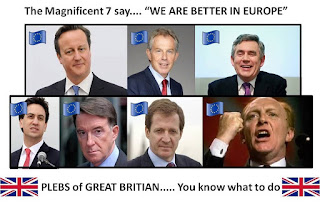 If you're happy about that, then vote REMAIN on the 23rd of June.

You wanker.
Posted by Uncle Marvo at 18:14 No comments: